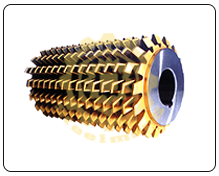 Involute Gear Hobs for generating gears of maximum accuracy, manufactured in finishing, pre-shaving with or without protuberance and semi topping profiles. These are supplied in single or multi-starts in class ‘AA’, ‘A’ & ‘B’

They are regularly determined for:

Single Thread Involute Hobs utilize straight calculated sides for producing gears for most extreme precision on outfit hobbing machines. They are typically determined for: Processes where no resulting tooth completing operations are required where enhanced exactness before tooth shaving operations is required.

Different Thread Involute Hobs: These hobs are intended to build profitability of the hobbing procedure. Progressions in hob producing have enhanced the quality to permit complete the process of hobbing with a various string hob. Contingent upon the lead edge, they will be either straight or winding sliced.

Involute Spline Hobs: Involute Spline Hobs have straight sides teeth like an apparatus hob, and are as a rule of stub tooth profundity. They are made in single or various string outlines, with diametral pitches gone from 2.5/5 to 128/256 and weight edges of 30Â°, 37.5Â°, or 45Â°.